Greetings from Japan! I spent three days last week at the 6th International Academic Identities Conference at the University of Hiroshima. The theme was The Peaceful University: aspirations for academic futures – compassion, generosity, imagination, and creation.

This post offers impressions of the conference, its location, the theme and the presentations. The theme was described as follows:

Peace is a concept that invites us to imagine, restore, create, construct and interact. It is not only the absence of violence, but something more sustainable and empathetic (Galtung 1996). Peace building can take place at different levels and often starts to bear fruit only after years of everyday care, which must continue even after seeing the fruits. This conference starts with an invitation: how can we envision a ‘peaceful’ future higher education and academic identities? What are we aspiring after as dwellers of the university and how are we going about it?

The location in Hiroshima, site of the first atom bomb attack in 1945, challenged the definition of peace. Conference organiser Machi Sato, Associate Professor in the Research Institute for Higher Education at Hiroshima University, defined peace as a process of having difficult conversations and collectively imagining a better future. I took some photographs of the atomic bomb (Genbaku) dome, the only structure left standing at the bomb site, which has been carefully preserved as a memorial.

Presenters at the conference did not shy away from asking critical questions about compassion, generosity, imagination, and creation in university contexts. As with most conferences, I missed more sessions than I was able to attend. This was compounded by presenting too many papers myself, something I hope to guard against in future. Those sessions I did attend were thought-provoking, discomforting, enjoyable and challenging. 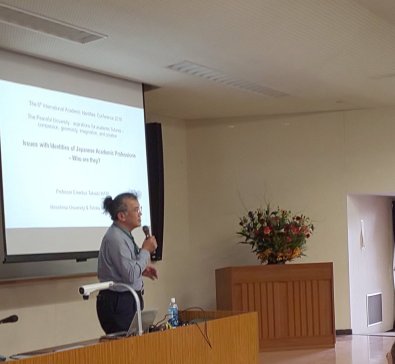 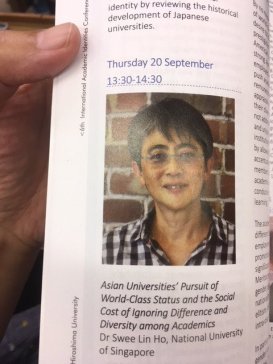 I have presented ideas from the keynotes in tweets because I use Twitter as a condensed form of note-taking. You can see the Twitter discussion at #ACIDC18.

Emphasis on accountability, performance assessment, corporatised university, publication outputs and high impact factors = an everyday crisis of academic identity in Japan, embedded within the university. Familiar across the world #ACIDC18

Machi Sato asked: “How can we envision a peaceful future for higher education and academic identities?” Swee Lin Ho asks: what does peace mean when higher education is ‘weaponised’ and politicised? #acidc18

3. Professor Bruce Macfarlane, University of Bristol, Restoring the freedom of students to learn in the peaceful university

Here is a taster of some of the presentations I enjoyed, which will be the subject of future posts:

In Hiroshima for #ACIDC18 and it’s green and warm and lovely! Think I spotted a fellow delegate who I know by name but not by face on the airport bus – gotta google to double check now. Heading to the campus, hope to see folks around there? 🙂 pic.twitter.com/NAPWAp5mhu

Just registered for #ACIDC18 and look at my lunchbox!! pic.twitter.com/VbRlgj1EHF

You can also watch a 20 minute video on the history of the conference on YouTube. Here is a short trailer:

8 thoughts on “Impressions from the peaceful university”