The brutal concrete building where I studied for my PhD is now a hollow shell, with the promise of a wonderful new space to come in 2020. 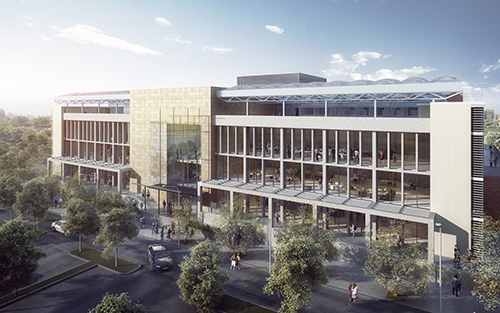 Re-reading Alison Phipps (2007) The sound of higher education: sensuous epistemologies and the mess of knowing for my recent post on the senses, I was thinking about how the campus space changes, and the layers of our memory and experience upon it. When I was a PhD candidate, there was a sculpture by Loui Fraser in the courtyard of the building above.  ‘Joy’ was described as the first public sculpture of a prostitute in the world. 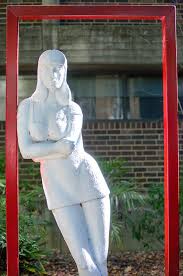 A journal article by Raelene Frances and Julie Kimber (2008), entitled ‘Joy’: Memorialisation and the limits of tolerance gives a history of the sculpture and the controversy it courted. In 1995, the sculpture was located on the corner of Yurong and Stanley Streets close to Kings Cross, the well-known red light district of Sydney. I remember seeing it here when I was living around the corner in Surry Hills. The repeated victim of vandalism and community outrage, the sculpture was removed by the South Sydney Council after eighteen months and made her way to the university:

Fraser invited offers from private art collectors but decided to decline an invitation from the CEO of Telstra’s Internet department to install Joy on the rooftop of his Sydney office. Instead, she approached the curator of Macquarie University’s Sculpture Park who was enthusiastic about the idea of Joy relocating to North Ryde. The move was also supported by the Women’s Room and the Women’s Department of the University’s Student Council and Joy made her way to her permanent home in April 1997. There she leads a more peaceful, if duller life.

I am not sure where Joy is waiting while the building works are underway, but she is part of the unexpected history of the university, and a reminder of the space the university offers to accommodate art and controversy.