Barbara Grant’s keynote from HERDSA has been haunting me. It was a pleasure to listen to, and has rewarded slow consideration. Entitled A Thousand Tiny Universities, Barbara challenged the audience to think about ourselves, our universities, hope and the future. In writing this post, I am relying on memory, my sketchy notes and some brief comments on Twitter. Rather than an exact record of what she said, it is as much, if not more, about what her keynote allowed me to think.

The title of her lecture was taken from Deleuze and Guattari’s (1987) A Thousand Plateaus and Grosz’s (1993) feminist response A Thousand Tiny Sexes. At the risk of performing an institutionalised reading that closes down complexity, Deleuze and Guattari ask their readers to reorient their thinking from structured, hierarchical, centralised thought (they call this aboresence) to horizontal, random, multiple (rhizomatic) thinking. Barbara’s line of argument about our relationship with the university was similiar. Barbara started with the bad feelings invoked when working in a university where staff are being made redundant: sadness, anger, and guilt. She has previously written  about her troublesome identity as an academic developer in a similar way:

For example, in claiming myself as an ‘academic developer’, I almost immediately begin to experience both a kind of inner dissatisfaction with the limits of what that identity offers me and, over time, the myriad ways in which that identity is perceived by others as either fraudulently academic, or baselessly know‐it‐all, or servilely a tool of managerialism … If I am going to refashion myself as an academic , and in the peculiar time of mourning it seems possible to do this in a way that it has not before, what kind of self do I want that to be?

Some of the tweets offer a glimpse of the layers of Barbara’s keynote:

Barbara Grant #herdsa18 keynote mourning, sad and angry at the state of higher education. The challenging state of conditions for academics when uni leaders no longer seem to value as they (re)-value, name and structure as neoliberal values are enacted hollowing out universities. pic.twitter.com/w8MD0sVxWQ

Barbara Grant: “how do you write a submission that will make a number of you hard working academics redundant? Redundant because there are not enough students to support their posts. It makes me angry that we don’t value HE.” @westernsydneyu @GirirajssRaj #herdsa18 pic.twitter.com/TWcmT4onyB

#herdsa18 @herdsa_conf Students do care for the universities. Now the million dollar question is DO WE AS ACADEMICS CARE ENOUGH ? Future is NOW. Let’s make a difference one step at a time, side by side. Best keynote ever :):) @chssbb @SeanSturm @stuschony pic.twitter.com/jsw9UrUM3A

We can each become a tiny university that finds hope in the nooks and crannies of the now. We can use our academic freedom to incite students to inhabit the university in different ways.

Develop your own counter stories and photos of your tiny university that tell a different narrative in neoliberal times.

What kind of self do you want to be in the university? Barbara shared two portraits of herself at work: one in her office, red lipstick, radiating pleasure, with a glimpse of a certificate for an excellent first sentence in the background. She contrasted this image with disturbing context of higher education: withdrawal of public funding, shifting costs to students, audit culture, a growing precariat workforce. In the second photo, she is writing with her dog in her arms. Less outwardly happy, the latter represents the greater joy. “An academic woman in her right place” says Barbara. She is a counter-story to the self as “servile tool of managerialism”.

Barbara Grant puts her two photos side by side – a poster for the neoliberal university and a counter-story. She asks: What would your tiny university photograph be? #herdsa18 pic.twitter.com/8uQkIQWOtc

Ultimately, Barbara’s keynote was hopeful. She called on us to locate ourselves in our institutions, to find counter-stories, to inhabit universities in different ways, to open up the nooks and crannies, cracks and crevices. We each become a tiny university. She asked the audience: what does your tiny university look like?

Starting with self portraits, my favourite are those taken unawares, where I am caught in the act of talking or writing. The self that is represented in these images is entirely relational, in communication with an unseen audience. 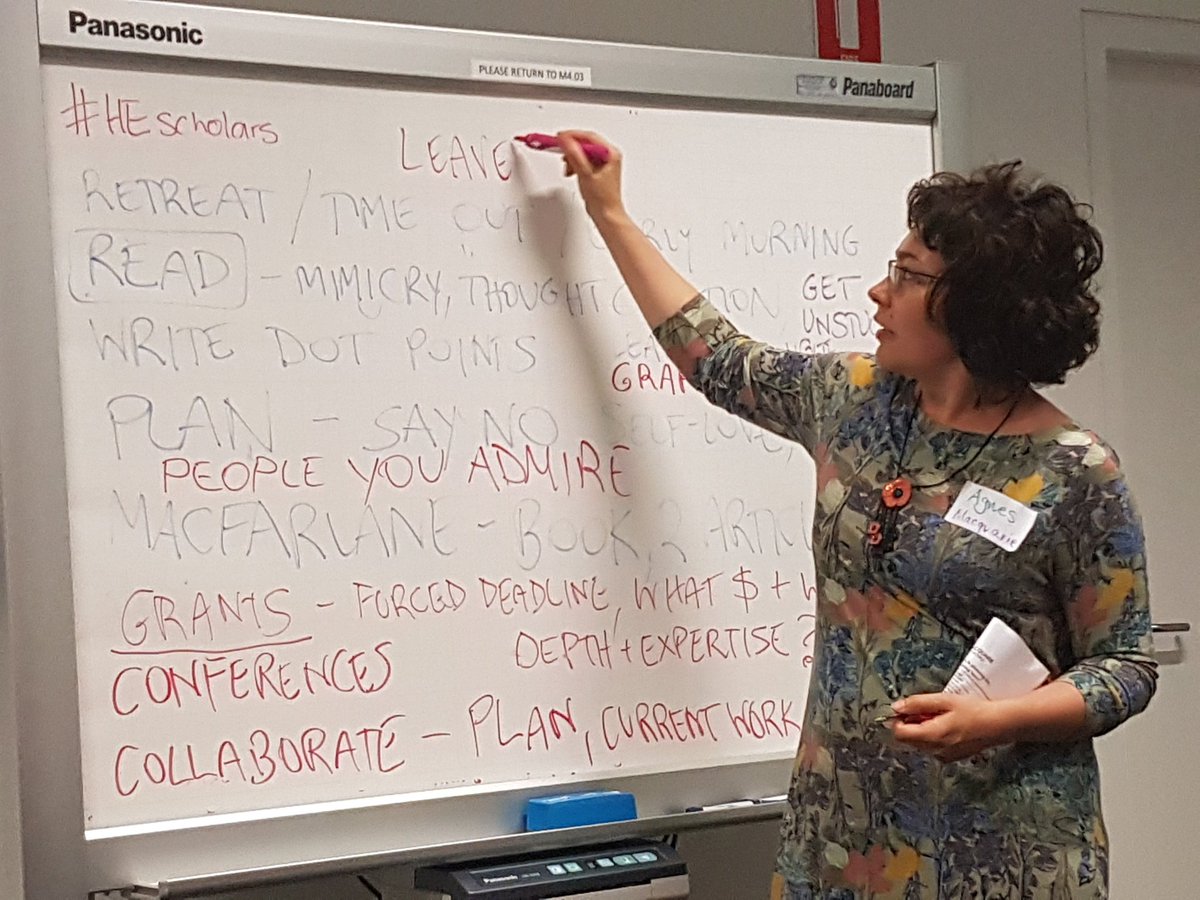 I have written a great deal on this blog about my experience of the university—sometimes uncomfortable, oftentimes collegial and occasionally joyful. This blog gives space to my tiny university, one among thousands or more.

2 thoughts on “Which university? Which self?”