This post brings together a host of ideas from previous posts: tea, resistance, complicity and activism.

I recently read Richard Hil and Kristen Lyon’s article A Post-Neoliberal Academy? in which the authors explore how academic compliance has been a key ingredient in the “neoliberal takeover” of universities. The authors list strategies of resistance that provide a glimpse of a university that “privileges the social over the economic, the cooperative over the competitive, and the common good over private interest.”

For some, this involves asserting their radical credentials through a contribution to the growing array of critical pedagogical work … Others subvert the system from within by chipping away at neoliberal practices through committees and other sites of governance, reasserting community values rather than commercial interests. Some even choose avoidance tactics such as simply not attending meetings, or reworking the language used in various forums—insisting, for instance, that we not refer to students as ‘consumers’ or degrees as ‘products’. For some academics, resistance means focussing on those aspects of work they themselves value, such as mentoring students or writing postgraduate workshops—and other projects that really excite. Yet others deliberately set lower performance targets in workload negotiations, argue for alternative decision-making processes, defend those on contracts, insist on tea breaks and staff meetings, and turn off their computers and go home.

Many of these ideas align with those discussed in (and through) the recent issue of Australian Universities’ Review on activism and the academy, and I have highlighted a couple of papers from the issue in previous posts on the university as infinite game and bad feelings. In this post I want to share an excerpt from my own paper co-authored with Cathy Rytmeister.

But first, a tea break. As much as I enjoy a cuppa, I did laugh at the image of academics plotting to overthrow neoliberalism while drinking tea. I keenly miss the daily shared morning tea that ended with the closure of our academic development centre last year. If only we had spent more time overthrowing neoliberalism, and less time munching biscuits and making small talk, perhaps we would still be there.

In our paper, A career in activism: A reflective narrative of university governance and unionism, Cathy and I combine personal narrative and political commentary. We tell the story of the pseudonymous Rosie, whose individual career in academic activism marked by a long-standing scholarly interest in the nature and work of universities, academic and professional roles, teaching experience in multiple disciplines and involvement in union representation. In the article, we say we picked the name Rosie in a nod to the iconic Rosie the Riveter, who represented women’s participation in the workforce during World War II (and whose figurine decorates my office windowsill). 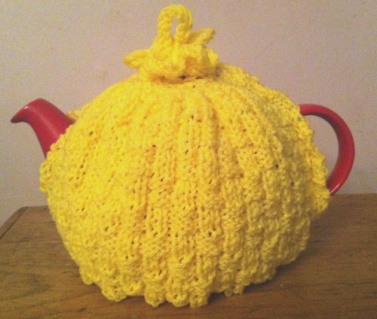 A canny reader, who for many years shared the centre’s ritual of morning tea with us, emailed me in response:

I’ve just been reading the latest edition of AUR.  ‘Rosie the Riveter’ indeed.  I know it’s a homage to Rosie the Cosy, who for so many years provided succour and strength to university women, academic and professional, secure and insecure. It is good to see her finally receive some recognition.

Rosie the Cosy was knitted and yellow, much like the tea cosy in the image above. Sadly, without a morning tea ritual, Rosie is now superfluous. She lives on in our paper, and I want to share some of Rosie’s words of wisdom for activists and tea drinkers alike:

Be brave. Be brave. Sometimes speaking out is your best defence. Passivity allows you to be pushed around. I know that nowadays it’s a lot harder, because people are casual and it’s their livelihood at stake if they speak out … [Paraphrasing a well-known folk song] ‘Join the union while you may. Don’t wait till your dying day. That may not be far away, you dirty, blackleg academic.’ Get as involved as you can and don’t give up hope. Spend time with people who you feel believe the same things as you do, because that’s affirming and strengthening, but balance that with spending time talking to people who don’t, because that grounds you in reality …Keep people around you who will challenge you. If you move into a position of power, if you have any power, own that power …

Finally, I would like to thank Alison Bartlett for her generous and thoughtful review of the activism special issue.

3 thoughts on “Tea with resistance”