Last week I attended the annual Higher Education Research and Development Society of Australasia (HERDSA) conference. I really appreciated the sustained and vibrant  participation by students across the conference. Over three days I attended sessions on peer review, teaching induction, research-informed teaching and quality curriculum; collected a wealth of resources and ideas; planned research with interstate colleagues; gave a paper; was interviewed for a podcast; and had excellent conversations. For those interested, here are some of the things I am following up or using in my work: Andrea Carr and Jo-Anne Kelder’s Curriculum Evaluation and Research (CER) Framework; Kym Fraser’s teaching induction MOOC Contemporary Approaches to University Teaching; Kathryn Sutherland’s exemplar development for early career academics; and the Student Wellbeing resources for staff.

Alongside many others, I tweeted and retweeted furiously throughout the conference.

Who was tweeting who about #herdsa17 on day 1. Link for hi-res image [~4MB] https://t.co/AZxEXqst2r pic.twitter.com/q2VXw1DsSG 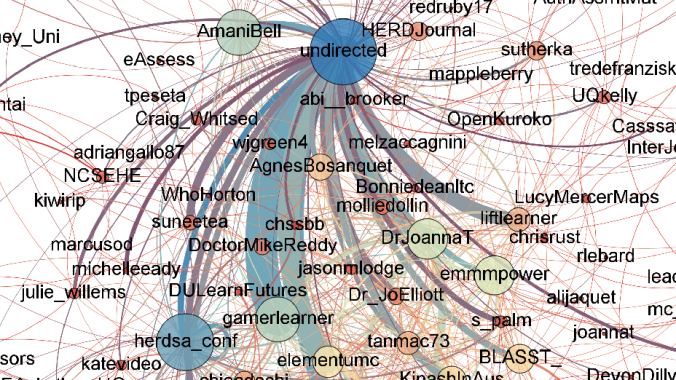 Thanks to Stuart Palmer for this visualisation. (My 4 year old looked at it and said, ‘there you are on the blue train, Mama’).

The Twitter hashtag #HERDSA17, with over 1000 tweets, was one of the aspects of the conference I enjoyed most. Not only did I find it an effective way of taking notes for the sessions I attended, it offered a glimpse of presentations I missed (and with 12 concurrent sessions, I missed more than I saw). Many of the sessions I attended did not allow time for questions, and here Twitter flourished. Twitter became a space in which  counter-views were aired and critique was voiced openly. This can be uncomfortable.

Doom, doom, doom (paraphrasing). Am I the only one hoping this story has a positive or at least hopeful ending? #HERDSA17

#herdsa17 SAP work at conference doesn't seem to have acknowledged the range of critiques about it. Puzzled at this.

#HERDSA17 the thing that made @mikeneary's work on SAP compelling is his acknowledgement of HE in a capitalist political economy.

Are we missing the important part of so called employability which is to improve our work lives not just sustain them? #HERDSA17

While many of the voices on Twitter were also present at the conference, the conversation felt different. Twitter was more critical, certainly – perhaps more troublesome – but also stimulating.

At an individual level, it is hard to hold two (or more) competing ideas in mind, to entertain differing viewpoints, to passionately believe something and consider alternatives. These challenges are compounded at a community level. But, at least at academic conferences, asking questions, offering critique and inviting dissent is crucial. I think it defines scholarship.

Today I enjoyed a workshop on assessment with Chris Rust, one of HERDSA’s keynote speakers, and was delighted to hear that, not only had he attended my presentation at HERDSA, but he disagreed with a lot of what I had to say! It only made our conversation more enjoyable.