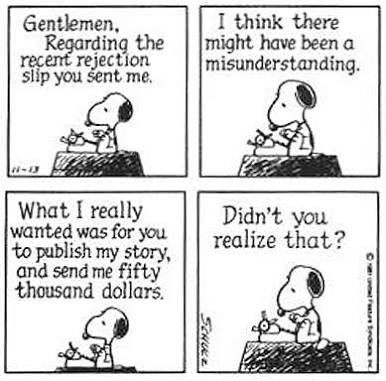 After celebrating an enjoyable and productive writing period in an earlier post, I am now cast down after a rejection. I had a series of rejections – for jobs, papers, abstracts and grants – last year. After many years of writing and publishing, I am highly experienced in rejection. But, my goodness, it can still sting.

I recently watched this TED talk on 100 days of rejection. Spoiler: this guy mostly chose low risk rejection, and (as is the trajectory of TED talks) he turned challenge into opportunity. It is based on the idea that what is holding you back is fear, and repeatedly exposing yourself to rejection allows you to overcome fear. But academic rejection has some peculiarities and, for the most part, I don’t think fear is the root cause.

Academic work is closely bound to identity, as this Chronicle article from a few years ago articulates so well:

Academic failure felt like the death of a substantial part of my identity—and I sincerely believed the best possible outcome was for the rest of me to die along with it. Of course I’m ecstatic that that didn’t happen, and mortified that I thought it should. But now I wonder: Was my all-encompassing sense of failure commonplace? And, if so, why? What makes academe so “special” as to traumatize its rejects into believing they are worthless to humanity?

Rejection feels personal. Last year, an assistant professor at Princeton published his CV of failures. He later added a meta-failure (his CV of failures was more successful than any of his academic work):

This resonated with many because it showed the continual series of rejections that a ‘successful’ academic negotiates. Most of the advice on academic rejection reads something like this: get used to it, learn from it, toughen up, persevere.

This advice didn’t help me much last year. (I think of it as the year of rejection but, of course, it wasn’t all bad, and the rejections continue). Here’s another thing that didn’t help: preempting rejection by doing more. Submitting three abstracts instead of one, applying for ten grants, sending out a CV like confetti, and saying yes to every opportunity just in case.

Here’s what did help me: talking to a careers coach, seeing a psychologist (through a work scheme), getting feedback on job applications from colleagues, and continuing to write with others. You need a thick skin, a supportive network and some luck to endure ongoing rejection. The solution to academic rejection is to seek out supportive friends and colleagues. Share your vulnerabilities. Spend time with those who don’t make you feel like a reject.

Increasingly, I find myself in a position to reject others – as a reviewer and editor or on a selection committee. It doesn’t feel good from this end either. But, whenever possible, I try to learn from my own rejections, especially those that hurt more than others –  the university that didn’t let me know I had missed out on a job (after interviewing me), a journal article rejected after revisions, and the brusque (or downright cruel) rejection.

On a lighter note, here’s a rejection generator to save some time with your next submission. Or, consider the Snoopy approach with this wonderful form letter for rejecting the rejection.